Recently I purchased a raspberry pi to replace the rather aged and (compared to the Pi) power hungry Asus EEE box that monitors the UPS for my home server cluster.
Its worth mentioning that the EEE box used to host VMs as well, but its lack of resources (max 2 GB memory), eventually lost it that roll, in favor of other atom mini-boards that can handle 8GB memory etc. 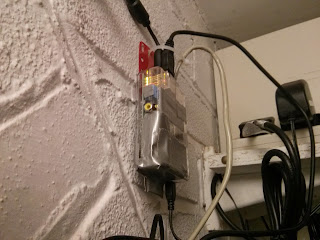 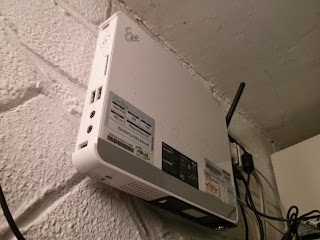 Setting up the pi was quite straightforward as the Raspberry pi site http://www.raspberrypi.org/downloads has a downloadable OS installer/recovery image that you can write the SD card (that will hold the pi's OS).
Despite the quirky name (NOOBS) New Out Of Box Software, is actually a very good, well put together bit of software. The lite version is best as it takes the least space on the card and it provides and easy recovery path (hold shift during boot) to restore the system to a fresh clean build with out having to remove the SD card from the pi box/case should anything ever go wrong.
(Note the lite version of NOOBS is a net-installer which means the pi must be connected to the internet to install / restore an OS)

The OS I chose for this pi was Raspbian, Debian OS build created specifically for the pi. This was chosen as Debian was known to have arm builds of all the software I needed to keep an eye on the UPS.

I won't go into the install process here (there are plenty vids and documents on the web regarding this) but the instructions I based my UPS monitoring setup for the pi are available at http://raspisimon.no-ip.org/ups.php
(note I have no affiliation with the sites linked in this post I just made use of them)